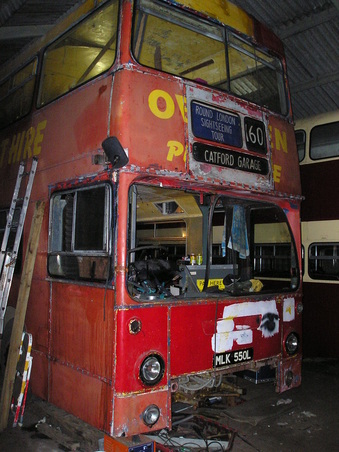 5/78 moved to West Ham for rebuild/recert

8-10/88 repainted dark blue with white roof and white/grey/red lined and sponsored by the Woolwich Building Society BSTE = British Science & Technology in Education Ltd, at Carlton (Bedfordshire). This establishment was until December 1987 known as BST/MRDU, that is British Schools Technology/Mobile & Resource Development Unit.

by10/05 moved to Eastry (near Sandwich) for storage


5/08 Jake Bamford of Margate for preservation.


6/10 Paul Triptree of Deal for continued preservation
DMS 550 is a remarkable survivor. An old London bus that spent her short service life in London's East End. In fact she only spent about seven years in service, the rest of the time being spent parked up in various depot's yards. The story of the DMS class bus and London Transport is a well known and unhappy one. London Transport looking to modernise it's fleet (which in the late 60's and early 70's contained a lot of crew operated RT type buses and later Routemaster buses) decided to purchase a fleet of Daimler Fleetlines. They had conducted trials in the 1960's between the two rear engined buses that were in production at that time, the Leyland Atlantean and the Daimler Fleetline. The Fleetline imfressed them more because it had a separate engine and gearbox and it was reckoned that this would make maintaining them easier. London Transport was already buying rear engined single deck buses (AEC Merlin and AEC Swift) which it was far from impressed with, and these too had a short service life. Bodywork on London Transport's Fleetlines was to be by either Park Royal (who bodied the Routemasters) or by MCW (who'd bodied earlier London buses and built trains for the Underground) and both would be identical apart from minor design differences. Aside to the basic bus, London Transport added various other things that were exclusive to them. These included various interlocks to stop the bus moving with any doors open, a high driving position and a gearbox that was semi automatic or fully automatic.
In May 2008 the previous owner of 550 contacted Friends Of The East Kent (FotEK) saying he had an old double decker bus that he was going to get rid of. Apparently the mystery bus had suffered a small fire that had affected the gearbox. If it wasn't wanted by FotEK he was going to break it up with an excavator.  Jake wasn't there when he turned up but apparently he pointed at Jake's 7681 and said "it looks like that!" Tony and Barrie from FotEK contacted him and told him what had been said. Jake jumped to the premature conclusion it was another VR and on his next break at work jumped into the car and headed over to the yard nearby. The bus turned out to be a DMS but Jake couldn't identify it as it was too far away. Barrie, having remembered it was a DMS and having seen it in the past said that it only had one set of doors left- the centre ones. The front doors having been plated over with panels and a window. Trawling through his DMS books Jake (for some reason) concluded it must be a later one- maybe one of the OJD-R batch which had been a Technology Bus as most of those had received the paneling over of front doors too.

Later Jake managed to get into the yard and discovered it was DMS550. A very sad looking DMS550 at that! The inside had flea bitten carpets and coach seats as well as lots of rubbish dumped in there too. There was a hole in the front upstairs roof which had allowed the rainwater to rot part of the floor. A kitchen now occupied rear of the lower deck which included a former wasps nest in one of the cupboards. There were traces of mice, rats and bird droppings littered the upper deck floor. He was half expecting Bill Oddie to crawl out from under the bus next! And of course, the front doorway had been plated over. A quick peek behind some of the soft trim that had been pasted on to the walls and ceillings revealed many original features, and another peek underneath revealed silver paint on the chassis! From what he could make out there was little in the way of rot too.

Jake called Barrie and told him of his find, however, and it was a very big however, as a London Transport DMS didn't really fit into to the collection policy of Friends of the East Kent! It seemed that DMS' were still unpopular- well this one was anyway! After much deliberation Jake decided to purchase 550 himself. Having just slimmed his fleet back down to one bus again after the sale of his Crosville VR there was an opening for the DMS.
A chat with 550's owner and the deal was struck. She was Jake's for a few hundred quid! Deal done! Since then he has stripped out the interior conversion, which, he found was built to a very high standard. Jake's also managed to get the Leyland engine ticking over nicely, although without an exhaust she does sound like a bomber. She still will not drop into gear though, this being traced to the fire damage. The main wiring loom has burned through in the area under the rear seat. So far this has been cut out and is awaiting a new section to be spliced in. Also Jake has opened up the front doors again which has improved the outside appearance of 550.
Jake has always had an interest in the DMS' right from when he was little. Trips to London would reveal them on sightseeing services outside Victoria or B20's in service around southwest London. He was always facinated by the rear end of the B20's with their chimneys ether side of the rear window (Leyland Titans do too because of that funny little square window). During the 90's DMS' were operated around the Ramsgate area of Kent, his home town. J&J Coachlines operated one on a Sandwich (Pfizer) to Ramsgate contract and Eastonways operated half a dozen on the contract between Port Ramsgate and the railway station.
Since then, a lot of work on DMS550 has been carried out. The wiring loom was repaired August 2009 and she was moved - under her own power - to the nearby garage at Sandwich for further work to be started. So far the front framework which the dash panels screw on to has been renewed, the front entrance is being put back in situ and the hole in the roof has been fixed. With keeping the other vehicles on the road, 550 sometimes takes a back seat. However, Jake was determined that she will be on the road for 2012, her 40th birthday year. Jake couldn't decide which livery she should wear, especially as there are some rather nice LT livery ones around anyway.decided which one. It could be anyone of Cityrama, Culturebus, Eastonways, maybe even poppy red East Kent to compliment 7681- not as far fetched as it seems as East Kent viewed DMS642 for a time at the old central works in Canterbury. Shortly afterwards M&D bought some.... It would certainly make and interesting 'might have been' had East Kent bought some for use around Dover for contracts and docks use instead of the ex Southdown duel door Fleetlines.
In July 2011 Jake was offered ex East Kent Bristol VR 7041 - the company's first one of that type. Not wanting to turn it down he was faced with the problem of having to sell one of his buses to make room for it in the collection. With very little work progressing on DMS550 he regretfully offered it up for sale where it was bought by Paul Tripptree of Lewisham for continued preservation. Paul has already got stuck into the task of rebuilding 550 with fibre-glassing the front dome and starting on the front doors/platform area and since then has become a very active and inportant member of the group.
As of October 2012, Paul has rebuilt the front platform area and installed the front doors so DMS550 now really does look like a proper bus. Paul is currently addressing a small area of rot on the nearside between the exit doors and the rear wheel in the stress panel. Compared to MCW bodied vehicles this is nothing and is very limited. Paul is also currently working his way through all of the electrics, fault finding and replacing where necessary. He is hoping to source an exhaust for her soon and give her a well needed service. 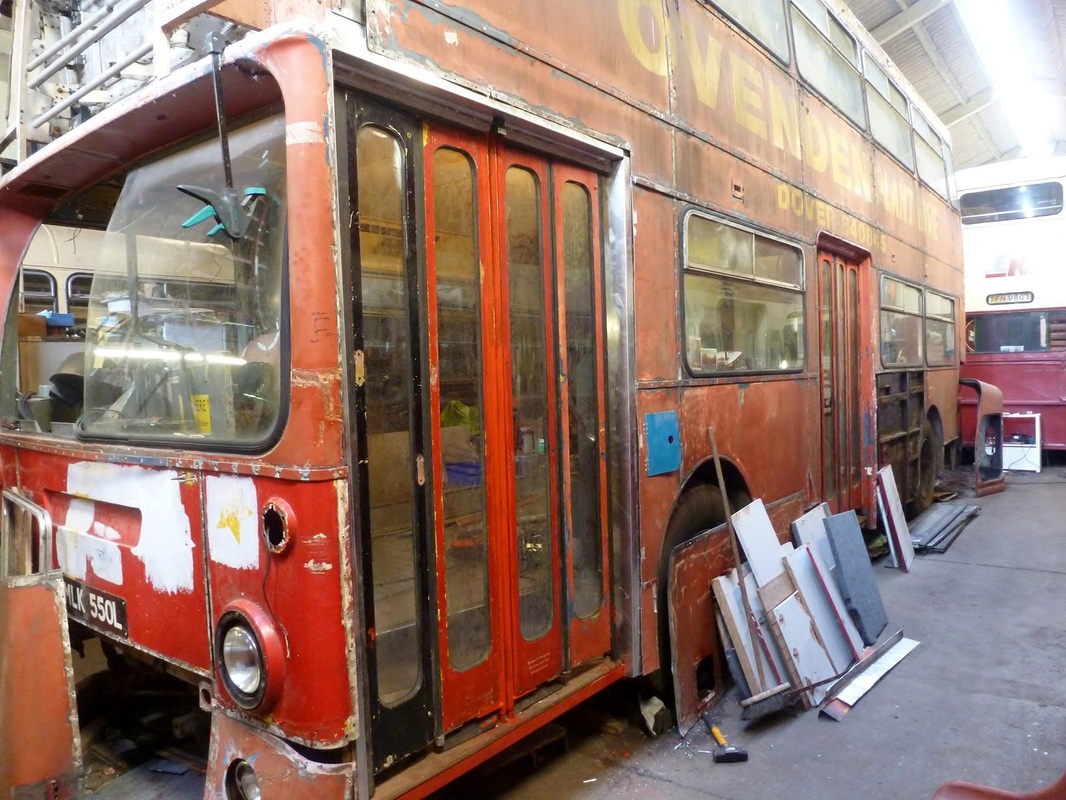