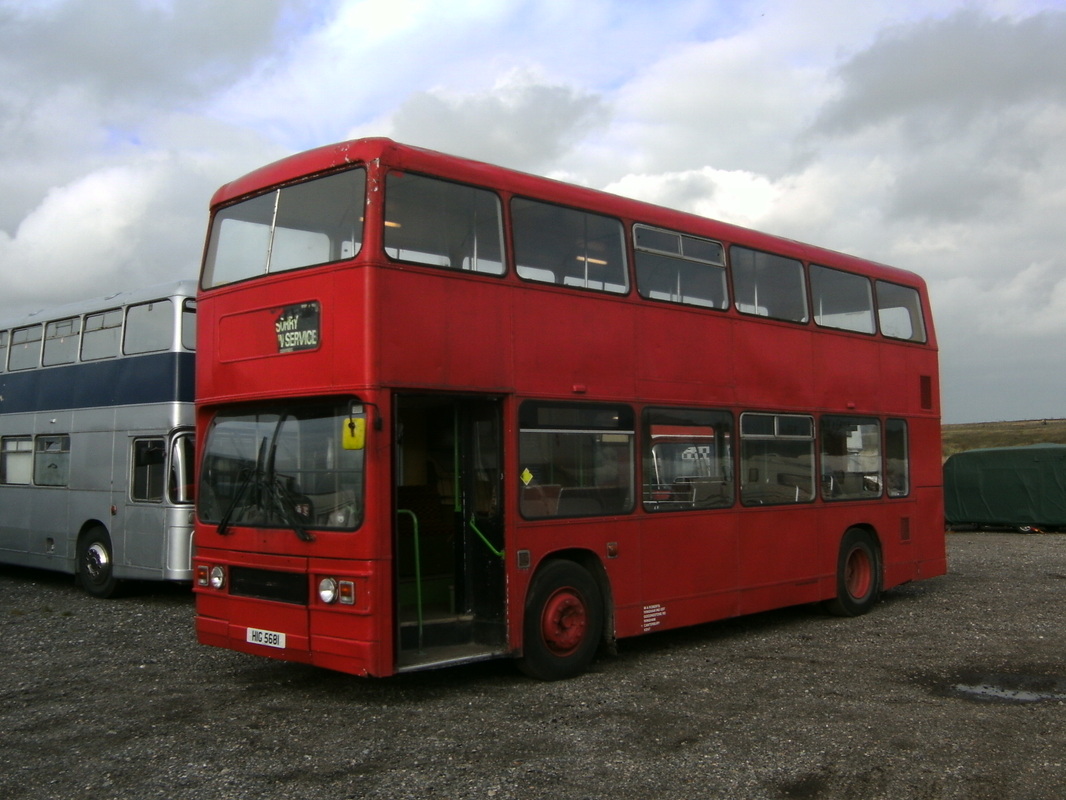 Owned by:        Bernard Sealy.
Make:               Leyland .
Model:              Titan TNLXB.
Bodywork:        Leyland H79F.
Built:                 1982.
Engine:             Gardner 6LXB 10.45 litre.
Status:              On the road.
T553 NUW 553Y
8/82 new to Aldenham
9/82 PR into store (Poplar)..
9/82 CT into service (Clapton)
1983 CT
4/84 CT
1985 CT
4/86 CT repainted
12/86 AG transfer (Ash Grove)
4/87 AG repainted
88-9 AG
2/90 T transfer (Leyton)
9/94 privatised to Stagecoach East London
5/98 T
10/98 T
1999 T converted to single-door H44/27F
3/99 transfer to Stagecoach United Counties, #801, Corby
3/02 sold to Fleetlink, Liverpool
5/02 bought by Roberts Coaches, Wingham
9/10 bought by B Sealy, Preservation
Information taken from Ian's Bus Stop!
T553 was delivered to London Transport's Aldenham works in August 1982 . During her service in London she served at Poplar, Clapton, Ash Grove and Leyton garages. In 1994 she passed to the privatised Stagecoach East London fleet still at Leyton. Withdrawl from London service came early 1999 when she was converted to single door and transferred to Stagecoach United Counties Corby depot where she was numbered 801.  In March 2002 she was withdrawn from Stagecoach and sold to Fleetlink, a Liverpool based dealer, however, before the buses moved north, Fleetlink sold 553 ( along with 554 and 595) to West Kent Buses and they picked up the buses, including 553, from United Counties. By May that year she had been resold on to Roberts Coaches of Wingham in Kent.
Roberts also ran T953 and the two buses would often be seen parked on top of the cliffs by Dover Castle in the daytime in between the school runs to and from the local Dover schools. This actually started to annoy Dover District Council who had provided the layby they used for cars to stop and admire the view and not as a bus station! Signs were soon errected that banned buses from using this spot.
On the 2rd September 2010, T953 was spotted turning into a Canterbury scrap yard by Jake. A visit to the yard later that day revealed that another bus would be coming in within the next few days. Jake got in touch with Bernard and they spoke to Robert's Coaches who agreed to hold onto the bus so they could see it with a view to a sale. Bernard liked what he saw and deal was done with T553 being saved from scrap at the 11th hour. Originally Bernard wasn't sure what to do with her. She didn't really fit in with the collection. As she came with a whole host of spares he did wonder if passing the whole lot on to someone else for further preservation would be an option. Talking to various people, Jake discovered that the only market for Titans was for scrap metal and both he and Bernard felt it was a shame to see her scrapped after the hard work and near miss with the scrap yard before! It was then they hit upon restoring her to a traditional liveried Stagecoach provincial bus. As they're both big fans of the southwest and it's buses they both came up with traditional Devon General livery for her, which , although not authentic will look fantastic when done. A similar bus working for Poynters of Wye wore a livery roughly like the old Devon one when Jake saw it working in Canterbury a few years back and it suited the bus really well. Nu came with a valid MOT so she will be on the road in her current condition for a short while and then this ugly duckling will turn into a beautiful swan!